Important Information During The Corona Lockdown

Sanjeev & Sial Teams Are Likely to Make A Come Back

Keeping in view the terrible state of affairs in the Club, there is a strong demand from some influential residents that experienced hands take over the man-agement of the Club and bring back its image to its former glory.

Who better than Sanjeev to take control of the Club? He has agreed to contest again after a gap of three years. To back him up in the RWA will in all likelihood be former president Inderjit Sial. The two tango well and both RWA and Club teams under their control will do a great job.

Senior citizen resident members are very fond of Sanjeev because he has the knack of pampering them and looking after their needs. He always says, “We have to support the seniors of 15A who have given so much of themselves to us.”

The same is the case with the youngsters who were recently made members of the Club. He is likely to induct some youngsters into his team of six. He has always been very keen working with youngsters, developing and training them to someday take the reins of the Club and give the new generation the type of club they want.

Unknowingly, in the last one or two years, there has been a big fall in the image of the Club in the eyes of outsiders. The corporate world is not willing to sponsor events in the Club because the present Club management, to get some quick money, accepted sponsorship to riff -raff business houses which do not have a good standing in the market. Hence the high-profile corporate houses have kept away. Recently a gold and diamond brand ‘Saya’ sponsored a musical evening. The large screen behind the singers constantly flashed loud moving pictures of the brand which disturbed the audience so much that it had to be removed after people complained. The sponsor showcased their products all over the decks and behind the rear lawn. It gave the impression that the Club had stooped low to get their sponsorship and in the process gave away its very soul. That’s what I mean by fall in image! We expect Sial and Sanjeev to recover our past elegance and class.

Similarly in the case of the RWA: it was Sanjeev, Sial and Minakshi who developed the entrances to the Sector so beautifully that visitors thought they were entering a fancy resort. This changed the image of the Sector and put us on a high pedestal. All these are very important to points that the duo bring with it.

It is very important for Sial and Sanjeev that they choose the right people in their teams to contest with them. This will be a very difficult task for them because they have limited vacancies (only five in the Club and ten in the RWA) and lots of aspirants have already lined up to become part of their teams. Let the best get elected! 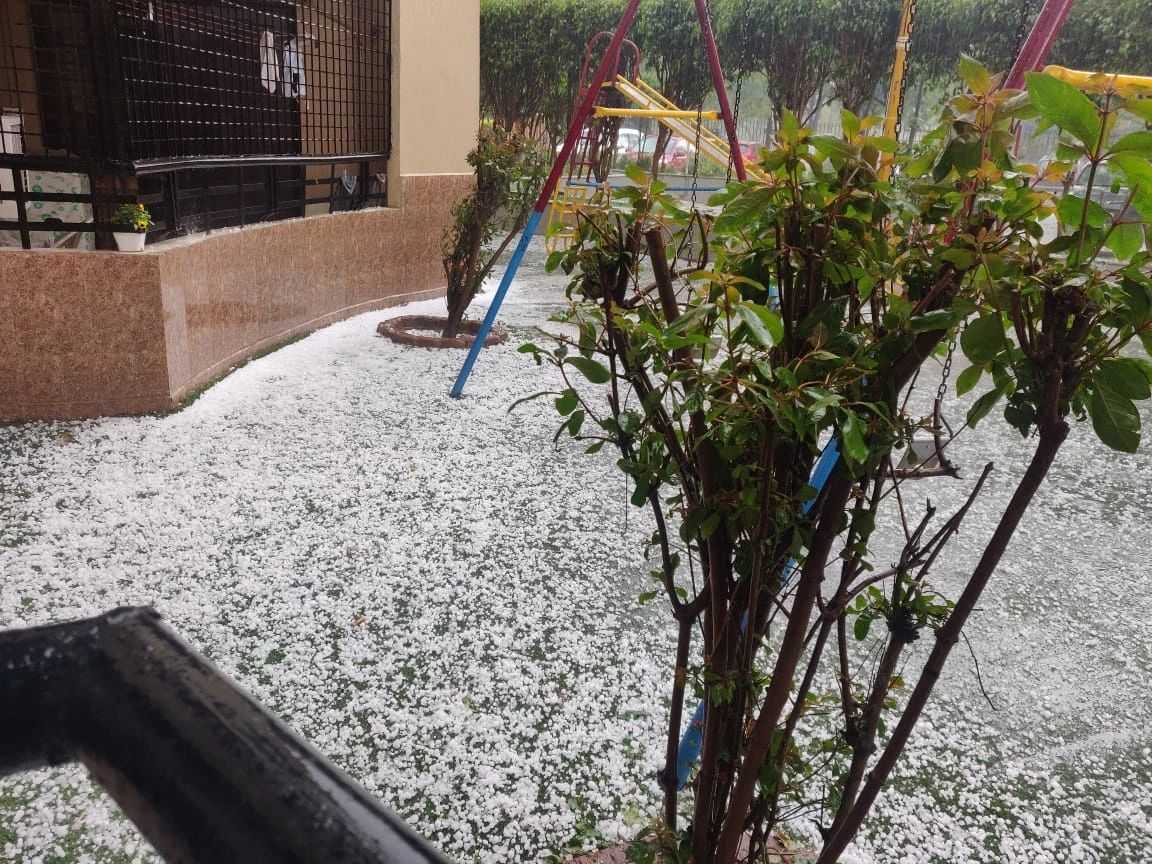 The hailstorm on 14th March took residents by surprise. Many of them posted pictures of the snowy-like white scenario around their houses. This one is from Geetika Sarin she said, “This is our lawn not Shimla" 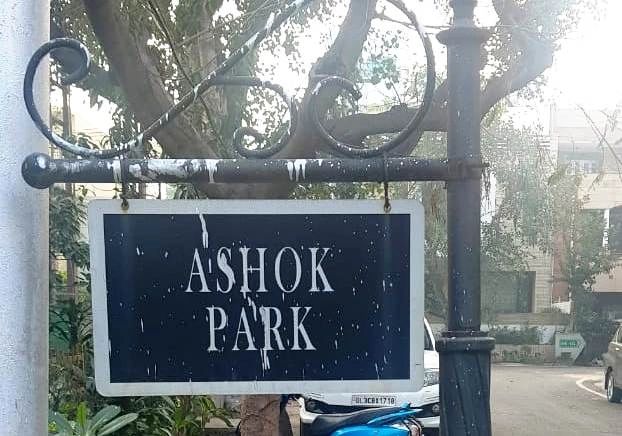 RWA has taken up the silver painting of electricity poles from its own financial resources. A good initiative, but very badly implemented.

RWA should have had better supervision. A resident posted, “Painting of lamp posts is destroying the signage boards. Everything is splashed with silver paint, some cars too! 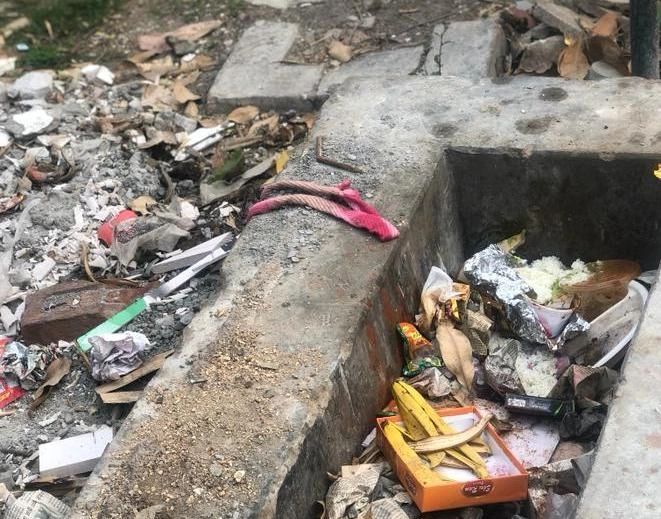 Manage the Area Around Your House Well!

Residents should request their drivers and other household helpers not to litter the area outside their homes. It appears that some resident owners don’t pay attention to the drains and pedestrian sidewalk near their homes. The picture above is of the area in front of a very senior resident’s house.

Anand Arya (H.No.353) has complained to the RWA that a lot of trash is being dumped inside vacant plots. He was particularly talking about the dumping on Plot# 352. He has also requested the RWA to issue an advisory to all residents and their staff/servants etc. To refrain from dumping in empty plots.

Holika Dahan, the triumph of good over evil is celebrated the night before Holi. The attendance on Holika Dahan on 9 Mar was very good this year, probably because Holi milan and the Club’s cultural event, which are held after Holika Dahan, were cancelled due to the Coronavirus scare

Reacting to Samvada Snapshot, ‘Dead Tree Outside Ashok’s House Falls on his BMW’ RWA has clarified that they inform the residents that whenever there is the need to cut down a tree, they should route an application addressed to the Dy. Director (Horticulture), NOIDA, along with a photograph of the tree through RWA

Club Should Cancel All Private Parties!

In view of the COVID19 threat, resident members feel that all private parties booked in the Club should be immediately cancelled. We could also curtail catering service.

Shabby maintenance of the Club Gym!

Shabby maintenance of the Club Gym!

The gym users are regularly complaining about the poor maintenance of the equipment and shabby conditions in the Club gym. The gym trainer is conspicuous by his absence. Now that the Gym is closed for 2 weeks, perhaps the Club management can utilize the time to improve the hygiene, sanitation and facilities of the gym.

Sec 15A Garden Enthusiasts Made Us Proud

At the 34th Vasant Utsav show organised by the Floriculture Society of Noida Authority, there were plenty of Sector residents and the Club who had put in their entries. Like every year, this year the Sector also bagged lots of prizes.

There are so many other resident enthusiasts who have beautiful gardens and pots but who did not participate in the competition. Looking at their flowers and gardens gives us passersby so much pleasure. We feel that next year our RWA could organize an exclusive Sector 15A flower competition for all the nature lovers of 15A and recognize their contribution.

Ladies Club 15A celebrated spouse night with great glamour and more than 200 guests attended the program. Silver oak hall was decorated beautifully in black and red. The women looked gorgeous and the gents looked suave. It was celebrated on Valentine’s Day which added the romance and charm to the night.